The run today
Thanks should go to the RA for having “discovered” today’s trail. We were out walking one Sunday about a month ago. When we passed the entrance to a bunker, being very inquisitive, Deep Throat checked out the door and discovered that it was unlocked and boldly entered the bunker. I must admit that I was a bit more hesitant, imagining that the door would be locked with us inside. Luckily, this did not happen. Having agreed that this could be the main attraction on the up-coming 3rd BBH3 run, it took some time to get hold of the key. That’s why the run was anounced at such short notice.

The drink stop will be in the bunker. In addition the trail will take us past remains of other historic military installations in this part of Bergen.

The run shouldn’t last much longer than approx. 1 hour. After the circle, there will be a debriefing at Trappen pub (if it is open).


Fredriksberg fortress
Fredriksberg fortress, named after King Fredrik III, is strategically placed on Nordnes’ highest point at 43 meters above sea level, with a steep cliff face to the sea on the west side. The Danish Major General Rüse (1624-79) initiated the fortress construction. It was planned with three bastions and a half bastion on the land side and a wall on the side adjacent to the cliff. Construction started in 1666 and was probably as a result of the Battle of Vågen in 1665.

The fortress was under military command until 1904, although the military had vacated the fortress some years earlier. It has also been part of the Bergen Fire Fighting Service and was a fire watch station from 1667 and a fire station from 1905 until 1926. The lookout tower is still in place.

Fredriksberg also served as a place of execution. This is reflected in the street named "Galgebakken" (Gallow Hill) just in front of the fortress. The last execution in peacetime in Bergen was carried out  when the Swedish vagrant Jacob Wallin was sentenced to death for murder and beheaded on 25 January 1876. The place of exexution was a bit further out on Nordnes and not far from the entrance of today's bunker.  In 1902 a law was passed prohibiting executions in peacetime.

Today the fort is the headquarters of Nordnæs Bataillon, a buekorps, and not open to the public. However, it is usually opened just before Christmas, when Nordnæs Bataillon sells Christmas trees and decorations. Last year, the trail for the BH3 Xmas hangover run passed through the fortress.

Part of Nordnes belonged to Munkeliv kloster, a Benedictines monastery built in approx 1110. The remains of the cloister are under the road and car park on what today is called Klosteret (right). The cloister was finally burnt and pulled down in 1536. Some of the stones were reused in other buildings, most notably Muren.


The bunker
There is hardly any information to be found anywhere about the bunker. What has been ascertained is that it was built by Russian prisoners of war during the Second World War. It was taken over by the local authorities after the war and used as a bomb shelter. In 1973 it was made available for Bergen Teknikersamfund, who still uses it for concerts and parties.

The bunker could have been part of a larger complex, or it could have been connected to MKB 12/504, which was part of Artilleriegruppe Bergen under the command of Stab.MAA (Marineartillerie-Abteilungen) 504 in Gravdal. Rumour has it that there are two tunnels leading from the bunker, one leads to the harbour at Verftet and the other leads towars the city centre at least as far as Torgalmenningen (a distance of 1.3 km). If these tunnels do exist, they are sealed and cannot be entred. There are two possible entrances to the tunnel leading to Torgalmenningen, one in Nykirkealmenningen and one in Holbergsalmenningen. Both these entrances are locked.

MKB 12/504 named “Sperrbatterie Bergen“, was composed of the following units:

It has not been possible to ascertain where the guns were placed on Nordnes. They might have been in Fredriksberg fortress or maybe somewhere in the park area. There are, however, two concrete platforms just over the hill from the entrance to this bunker which look promissing. Hopefully, further research will shed some light on this matter.

Other units of MKB 504 in the Bergen area included:

The structure in front of us was built in 1666 at the same time as Fredriksberg fortress. It is known under the name “Katten”. This area was part of the farmed land which belonged to Munkeliv kloster.

At the northern-most point on Nordnes, there are the remains of a strange construction mostly visable from the sea. 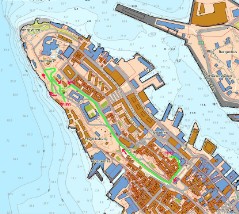 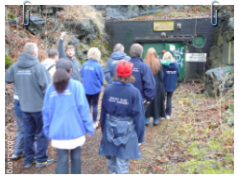 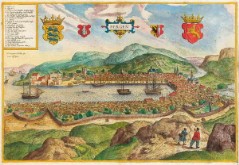 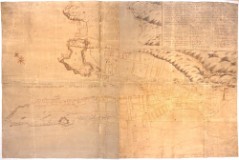 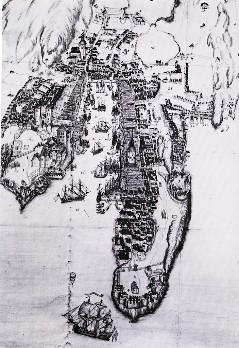 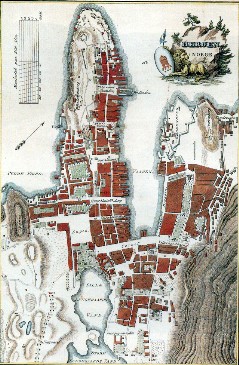 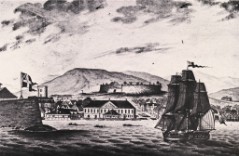 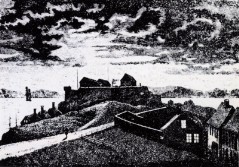 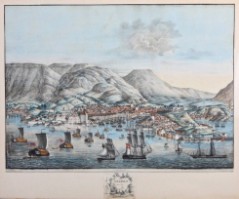