During World War 2, Laksevåg went from being a quiet rural area to the west of Bergen, to becoming the main base for the 11. German U-Flottille, and the most bombed area in Norway.

The dominating structure on Laksevåg, was the u-boat bunker “Bruno”. The shipyard “BMV Laksevåg” and ship repair facilities which belonged to BDS (Bergen Steamship Company) were expanded and given the name «Kriegsmarinewerft Bergen – Danziger Werft”. Early on in the war private houses were requisitioned to house workers connected to the bunker and shipyards. Before France was liberated in 1944, Fdu West was moved from Angers to Bergen. A lot of engineers and technicians were also moved to Bergen. To cater for this increase in people needing to be billeted, barracks and buildings were built in the vicinity of the bunker and adjoining shipyards. As all buildings were built on non-military land the houses were sold to/used by civilians after the war. Many of the buildings and bunkers are still standing, and a few of the gun positions have also survived the expansion of Bergen after World War 2.

The main areas are marked on an aerial photo from 1951 (below). For more details choose the appropriate area from the menu under "Pictures", "Buildings" and "Laksevåg" (left): 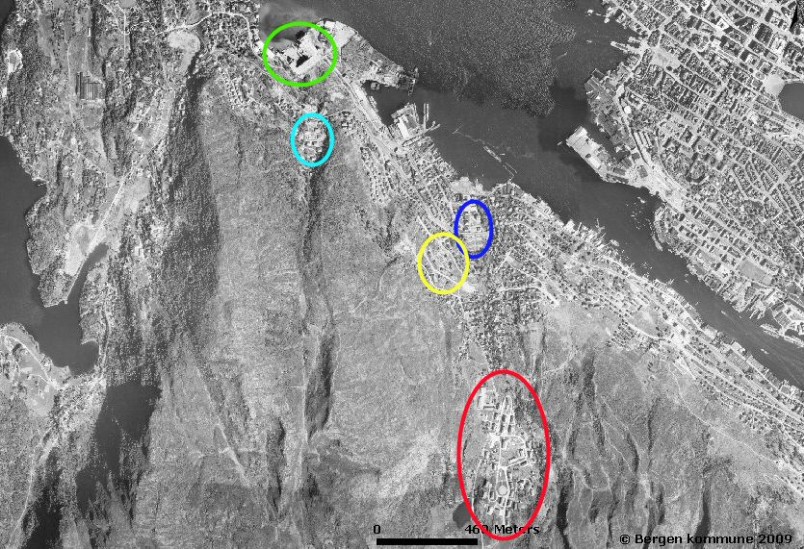