The run today will take us past all three 21 cm gun positions, past what was possibly a 57 mm gun position, two of the 24 cm howitzer positions, some AA gun positions, through a few trenches, past the two Mornier munitions bunkers and past watch towers and command posts. We will not be running past the torpedo battery, as the climb through the forest from the battery to the gun positions would be a bit tough for the kiddies.

We will pass the gun which is featured on the Bergen Bunker H3 logo and is mounted in one of the 21 cm gun positions. It is not one of the original guns, but a 15 cm Kruppgeschütz mounted some yeras ago.


Kvarven
The name Kvarven is apparently from an Old Norse word referring to where ships turn and go out of sight.

1894-1914
In 1836 the institution “Central-Commissionen for Norges Befæstningsvæsen” raised the possibility of establishing permanent fortifications around Bergen. In 1850 gen.major (Major general) Broch proposed fortifications some distance from major towns in order to stop an advancing enemy before they could launch their attack on these towns.

In the late 1800’s, relations between Sweden and Norway had gradually worsened as Norway wanted independence from the union with Sweden. To account for the possibility of a violent dissolution of the union, new coastal defences were built. The three forts that formed the inner fortifications around Bergen, namely Kvarven, Hellen fort and Sandviksbatteriet, were planned and built in the period 1894-1902.

In 1894 Bergen Forsvarsforening (Bergen Defence Association) made NOK 100.000 available to start the preparation for building fortifications around Bergen. On the 20th November 1894 the Ministry of Defence gave the go-ahead to start the construction of the fortifications to defend Bergen harbour and the naval installations at Marineholmen and Wallemsviken from possible sea born attacks.

None of the above forts came into their intended use as the union between Norway and Sweden was dissolved peacefully in 1905.

1914-1918
During the First World War, Kvarven Fort had a full complement of soldiers in order to maintain Norwegian neutrality. This is also a period when a lot of new buildings were erected including among others the Monier storage bunkers, bath facilities and a hospital.

At a weapon inspection in 1936 it was decided that Kvarven was within an acceptable state to defend Bergen. At the outbreak of the Second World War the fort had three 21 cm guns, three 24 cm howitzers, two 75 mm M 1916 AA-canons, two 7.92mm Colt M 1929 machine-guns, three 57 mm canons and two 110 cm searchlights in addition to the torpedo battery. 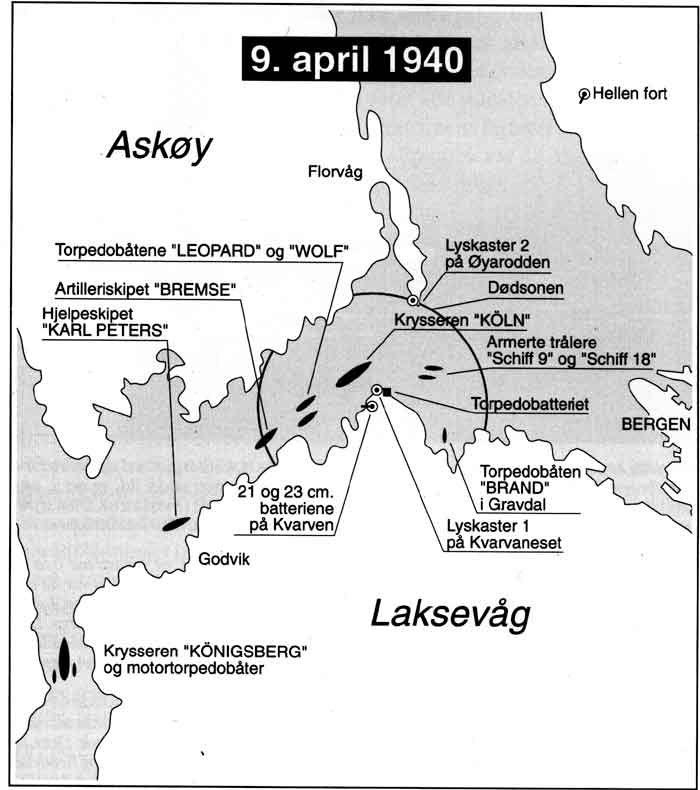 Norway attempted neutrality at the outbreak of the Second World War, but was invaded by Germany in the operation Weserübung on the 9th April 1940.

On the 8th April 1940, 279 soldiers and 33 officers were manning Kvarven; their average age was 40. There were no reserves, and some of the men had to endure long watches before they were relieved. Their military training was insufficient, and the fort had no units prepared for close defence. The attacking German forces on Bergen comprised of approximately 1900 troops.

The following is a description of the attack on Bergen on 9th April 1940 based mainly on a report written by the commanding officer of Bergen Festning, colonel Willoch:


According to one source, the German forces sent the following report to their headquaters in Germany "After a short battle Bergen has been occupied, minimal loses."

The German invading force (Kriegsschiffsgruppe 3 under KAdm. Schmundt) consisted of:


Official German loses included 9 soldiers and 10 sailors, although Willoch thought they were probably higher. Willoch also comments that he found it strange that Norwegian casualties were not greater considering the overwhelming German superiority in men and firepower as Hellen fort was attacked by German bombers, as was Kvarven in addition to being shelled by the German warships.

Salvos fired from Kvarven and Hellen:

Willoch and his officers agreed that the soldiers manning Hellen fort and Kvarven were calm and efficient under fire and performed their duties in an admirable manner. He concludes that he was convinced that under different circumstances the outcome would have been very different. Willoch listed 25 things that went wrong and led to the fall of Bergen Festning (in Norwegian).

1945 to 1961
Kvarven passed back to Norwegian control in 1945, and was in service until it was closed down in 1961. The military still use part of Kvarven, but most of it is open to the public and it is today managed by Bergen og Omland Friluftsråd.


The details in the various sources vary. The differnces are mentioned in the disertation.